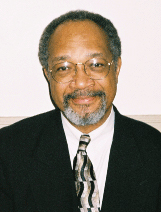 Chaplain Zimmerman is a native of South Carolina, where he received an undergraduate degree (pre-med) from Benedict College in Columbia, South Carolina (1962). In 1965, Chaplain Zimmerman became the first African-American to earn a Master of Science degree in Guidance and Counseling from Long Island University, Brooklyn, New York (1975).

Chaplain Zimmerman served as a campus pastor at Idaho State University, Pocatello, Idaho. He then returned to his home state to continue his ministry as campus pastor/instructor at Morris College, Sumter, South Carolina.

Chaplain Zimmerman entered military service in 1967, and served in a number of positions both in the United States and abroad. In August 1990, he became the first African-American to serve as Chief of Chaplains of any military service. In this position he carried the rank of Major General, U.S. Army. Also, as Chief of Chaplains, he was responsible for the management, training and assignments of more than 6,400 chaplains and chaplain's assistants of both active and reserve components. While in the military, Chaplain Zimmerman earned a number of awards and decorations, including the Distinguished Service Medal, the Defense Superior Service Medal, Legion of Merit, Bronze Star, three Meritorious Service Medals, the Army Commendation Medal, and the Vietnam Honor Medal, 1st class. He is a graduate of the U.S. Army Command and General Staff College and the U.S. Army War College.

Chaplain Zimmerman was a 1990 recipient of the NAACP's Roy Wilkins Meritorious Service Award, and in 1992, he was selected to the South Carolina Black Hall of Fame. From 1994 to 1998, he served as the first African-American Director of the Department of Veterans Affairs National Chaplain Center, located at the Veterans Affairs Medical Center in Hampton, Virginia. In this capacity, Chaplain Zimmerman directed Department of Veterans Affairs Headquarters level chaplain activities, including the Chaplain Education Center, and provided leadership to the Department's National Chaplain Service, which is responsible for all chaplains of all denominations in 171 Medical Centers.